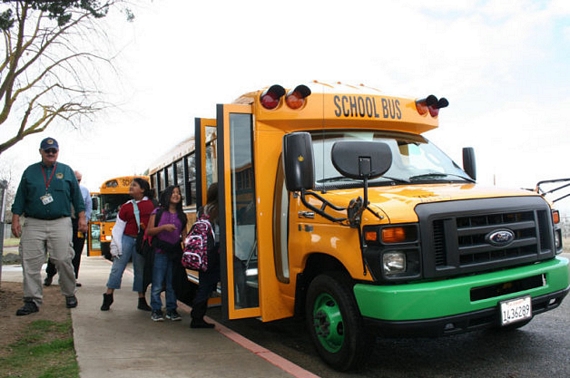 Electric vehicles have been growing steadily over the past couple of years.  So far, though, no school district in America has embraced them as their ride of choice for transporting students to and from school.  That changes now, as the King’s Canyon Unified School District (KCUSD) in California’s San Joaquin Valley has begun using a Trans Tech SST-e as the country’s first all-electric school bus.

An electric version of Trans Tech’s popular SST model, the vehicle can ferry up to 25 students (18 with a wheelchair lift and configurable track seating for up to three wheelchairs).  It looks, pretty much, the same as the regular SST buses you see being driven around school districts (yes, regular school buses don’t have flaming tails), although with less seating capacity to accommodate the likely bulkier electric powertrain hiding under its mass.

The Trans Tech SST-e uses a powertrain from Motiv Power Systems, which has been providing similar electric mechanisms to a variety of heavy-duty vehicles.  Buyers can have the bus equipped with up to five battery packs, which should give it a driving range of up to 100 miles.  Each SST-e costs about twice as much as a comparable SST model (which is why schools have been slow to embrace them), although it will cost just an eight to fuel and a third to maintain.  That means, considerably less overall expenses over its lifetime, an important statistic that could spur interest on the electric bus despite the high initial investment.

Currently, only one Trans Tech SST-e is being used by the KCUSD, although they have three more on the way.  Similar programs are also in the pipe in both Chicago and New York.