IMEC Etches The Smallest World Map Onto A Photonics Chip 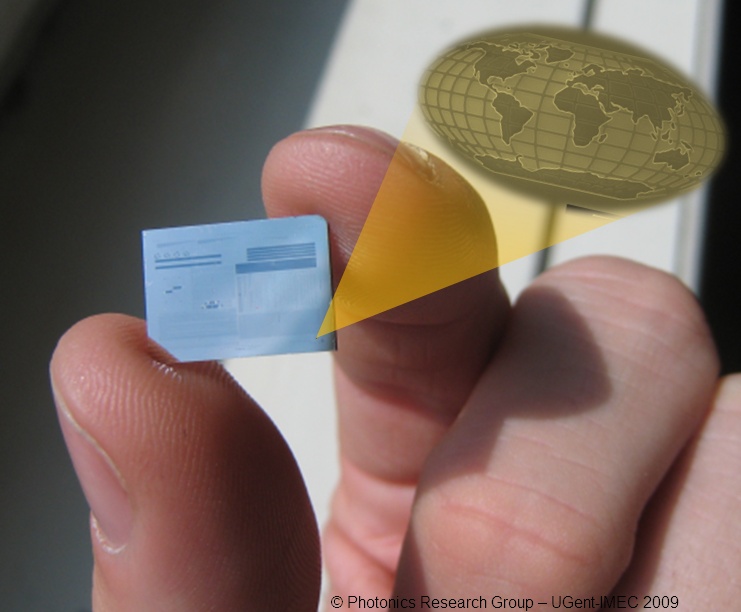 Your map of the world will always be too big next to this thing: the Smallest World Map, as created by the Photonics Research Group of Ghent University-IMEC.  Sure, you’ll probably have no use for it, but I’ll bet all the crab lice living in your body (ewww, gross) will appreciate one.  Hey, a couple of them may be interested in geography too.

Why would anybody make a map so small?  Because they can.  And it gets attention.  Heck, any map with a scale of 1,000,000,000,000:1 (that’s one trillion to one) deserves some gawking over.  According to IMEC, the map reduces the 40,000 kilometer circumference at the equator to around half the width of human hair (40 micrometers), which is nuts.

The Smallest World Map was etched on a silicon photonics test chip using high-res optical lithography techniques.  I don’t even know what that is, but it sure sounds like it requires patience – plenty of it.  Fabrication involved a 30-step process that included activities such as layer depositions and chemical etching.

While the map itself is more an aside to get the chip noticed (it’s a test chip for a new nanophotonic circuitry), it’s really quite impressive.  Maybe not as impressive as the actual purpose of the chips (which is to integrate optics in packages that will be way, way smaller than current systems), but I want one just the same.  Can the next batch of aliens who will abduct me etch similar markings on the chips they will lodge in my brain – I want the universe, though, the entire mapped universe in ultra-micro scale!