KFC Double Down Sandwich Ditches The Bread For Chicken Fillet 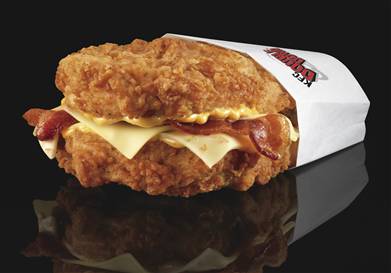 Who needs bread? Not KFC, apparently, who are trading in the baked goods in their new Double Down sandwich for fried chicken. Hello, cardiac arrest.

How can it be a sandwich without bread? Because they crammed the filling between two thick slabs of boneless fried chicken, that’s how. Yes, the crisped, browned white meat is supposed to be the bread. Rawwrrr. Very cavemanly of you, KFC.

Originally tried by the fastfood chain back in August of last year, the Double Down features two slices of bacon and two melted slices of cheese (Monterey Jack and Pepper Jack), all sandwiched between two juicy blocks of chicken fillet. The bread (errr…chicken fillet) is available in both the Original Recipe and Grilled versions, so health-conscious fastfood fans can pretend to eat healthier by opting for the oil-free variant.

As always, the KFC meat used in the sandwich should carry the same South Park Medicinal Fried Chicken Seal of Approval (which doesn’t exist, by the way) that allows it to further the fight against testicular cancer. If you don’t get the joke, you should really watch more TV. What are you doing enjoying life outside the house, anyway?