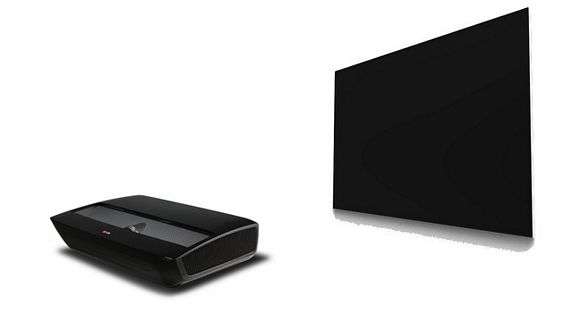 Video projectors aren’t the easiest entertainment systems to install.  In fact, it’s probably the overriding reason why people would rather invest their money in flat panel TVs than cinema-style projection systems.  The LG Hectro Laser TV, which is actually a video projector, might narrow that gap.

While it’s not the first system to beam 100 inches of video to your walls, it’s remarkable for doing it without requiring a lot of space between the surface and the projector.  In fact, it will throw up that 1080p 100-inch display with just 22 inches of separation — yep, less than two feet from the wall, allowing you to set it up in the coffee table while enjoying a gargantuan-sized movie in the living room.

The LG Hecto Laser TV is a small projector standing just 5.7 inches, with a native shooting resolution of 1920 x 1080 pixels and a 16:9 aspect ratio.  It comes with three HDMI inputs, a TOSLINK output for audio, integrated 10W stereo speakers, an RS232 remote, and WiDi and Miracast compatibility.  And in case you’re a fan of LG’s Smart TV platform, that’s fully supported as well, allowing you to use the system as a genuine TV replacement.

Want something better than your walls to beam your TV shows on?  Not a problem, since LG is bundling it with an included projection screen, ensuring that shoddy paint job you did won’t do anything to distract from your viewing experience.  LG also claims the projector’s bulb can last five times longer than conventional projectors.

No word yet on pricing or availability, although the LG Hecto Laser TV is slated to debut at CES 2013.