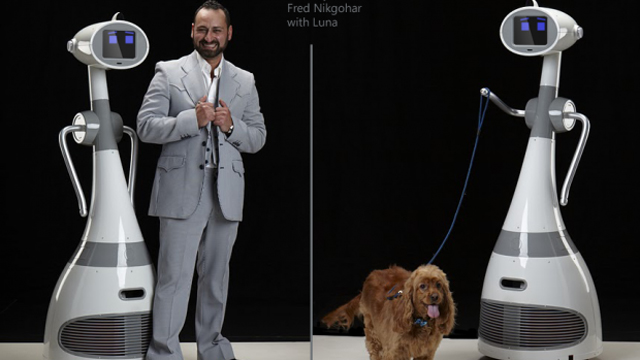 Will robots ever become our constant companions like we’ve seen in countless movies?  I don’t know. If you’re keen on the idea, though, Robodynamics’ Luna might be worth trying out.

Made in conjunction with design firm Schultze Works, the tall and slender automaton is being billed as “the world’s first personal robot.”  We’re not sure how “personal” that “personal” is going to be, although it does calm my anxiety a bit that it doesn’t look remotely human (unlike those creepy people-like robots we’ve been seeing more of these days).

Luna is, essentially, a programmable robot that gets around on wheels, can turn into any direction and has two functional hands.  The limbs are specifically designed to move into multiple positions and serve various functions, such as holding the dog leash or carrying a tray of drinks (no way it can grab a beer from the fridge, though — boo).

The robot runs off a Linux flavor as its primary platform and can be programmed using open standards.  Details are scant, but we doubt it’s as richly-featured as Willow Garage’s ROS (Robot Operating System)/OpenCV combo on the PR2.  According to Robodynamics, the robot will have a touchscreen display face, cameras, microphones and WiFi on board, along with available expansion ports for additional hardware.

Robodynamics says they’re looking at a 1,000-example run and a 2012 release date for Luna.  There aren’t a lot of information on the website, though, so this could very well be a long ways off from ever really going to production (much less on sale).