Maserati GranTurismo MC: For Gentlemen Drivers With The Cash To Show For It 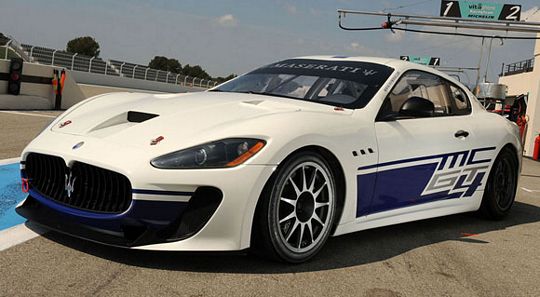 The production version of Maserati’s GranTurismo MC rolled out a few days ago and it might as well be billed the cure to a boring existence.  Engineered for the race track instead of the road, it “sports” the GranTurismo’s killer looks and soups it up with even leaner muscle.

Based on the MC Corse Concept introduced last year, the car is expected to race in GT4 European Cup events during the second half of the season.  According to Maserati, GT4 specs most closely resemble existing GranTurismo road models, which should make the track-only variant a logical purchase for customers looking to pit their mettle against other drivers.

Output for the 4.7-liter V8 engine hasn’t been disclosed, although it’s expected to crank out at least 450 bhp when it does hit the tracks.  It comes with carbon fiber bodywork, Lexan plexiglass windows, a full roll cage, carbon fiber interiors and upgraded racing-quality brakes and suspension.

Maserati says they’ll be selling the GranTurismo MC to a select group of “gentlemen drivers” by October of this year.  Price for the race-optimized GTs is a whopping €135,000 plus VAT.  Make sure you get proper training before you take this thing out – that’s a lot of bills to burn in an unwitting crash.