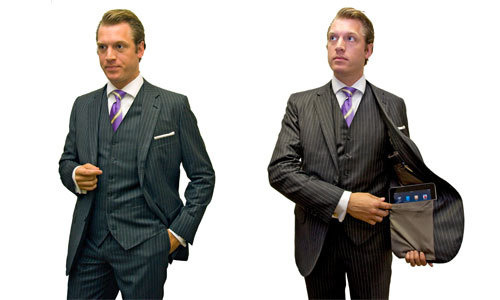 Don’t like hauling a bag along just to carry your iPad? Sure, you can wear a specialty travel vest to hold it. If you gear up in business attire for work, however, there’s no chance you’re pulling that look off. You need a suit with an iPad-sized pocket and that’s exactly what Mohan Custom Tailors now offer.

Just like the dashing man in the photo above, you can arm yourself with your favorite new toy, all while looking dapper in full business threads. And, we’re not kidding, those suits look nice. I have a sneaking suspicion the guy didn’t have an iPad on the inside pocket in the first photo, though, since there’s no bulge whatsoever. Now, if this suit manages to really do that (no bulge), then that’s seriously awesome.

There aren’t much details on Mohan Custom Tailors’ iPad suits, but I’ll bet that left side will droop a little with a pound-and-a-half tablet weighing it down. Unless you ask for a second iPad pocket on the right side too (it’s custom-tailored, so that shouldn’t be a problem) and carry a second slate around, so your lines will look even.

Honestly, though, that looks like a scary place to put such a sensitive piece of electronics. That’s right around the body part that gets bumped on table edges, hits the railings on stairs and knocks into the backrest of most office chairs. Very, very dangerous. You’ll have to contact Mohan Custom Tailors for pricing, but it should depend on the kind of patterns and materials you want to use. I suggest asking for shock-proof fabric like Batman’s suit, if there’s even such a thing.