Pedal The Ocean: One Man, A Pedal-Powered Boat And 2,672 Miles Of Water 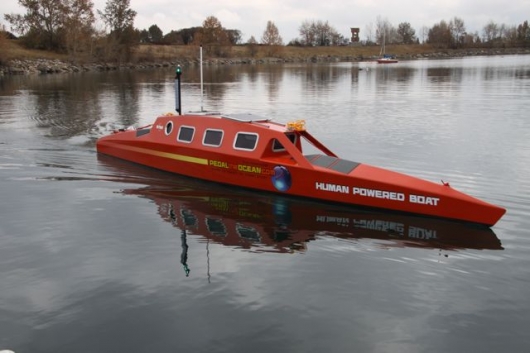 It’s one thing to ride a pedal-powered boat.  It’s completely another to take it from Canada to Hawaii all by your lonesome.  That’s exactly what Canadian Greg Kolodziejzyk will be doing in July, when he takes his ocean-faring boat Within for his Pedal the Ocean project.

A world first, the adventurer will travel the full 2,672 miles of water on nothing but leg muscles.  If that sounds crazy, well, it’s not like he’s new to doing that at all.  In 2006, he set the longest distance ever traveled in one day on pure manual effort, using a custom-built recumbent bike.  The following year, he set a similar record on water using a pedal-powered tamaran. 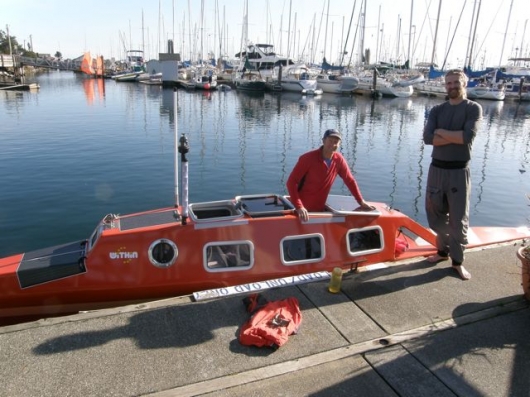 For his latest attempt, Kolodziejzyk will take to the ocean on Within, an enclosed, self-righting, pedal-powered water vessel that can attain speeds of up to 9 kph.  Five watertight compartments are crammed into the watercraft – the forward compartment (where they’ll keep food and supplies intended to last for 100 days), the main cockpit (where Kolodziejzyk will spend most of his time pedaling), a sleeping cabin and two small equipment storage areas (bow and stern).  Designed by naval architect Stuart Bloomfield, it should be big enough to maintain its way in moderately adverse conditions, yet small enough to be pushed along by just one man.  Well, one obviously strong man.

The boat is powered by a custom-designed drive leg from MitrPak, which turns a two-bladed propeller that sends the vehicle forward.  It can be replaced or serviced while on water, allowing the craft to stay its course even when problems arise.   Other equipment on the boat include a two-way radio, GPS, AIS monitor, a satellite phone, bilge pump, water desalination equipment, navigation light, an iPod (yep, everyone needs some amount of distraction) and small power generators (solar panels and a wind generator).  There’s an autopilot capability too, just in case.

How long will the trip be?  They’re estimating that Greg will be on water for at least two months, pedaling his way from British Columbia to the shores of Hawaii.   They’re currently subjecting both Greg and his boat to sea trials in preparation for the daring feat.