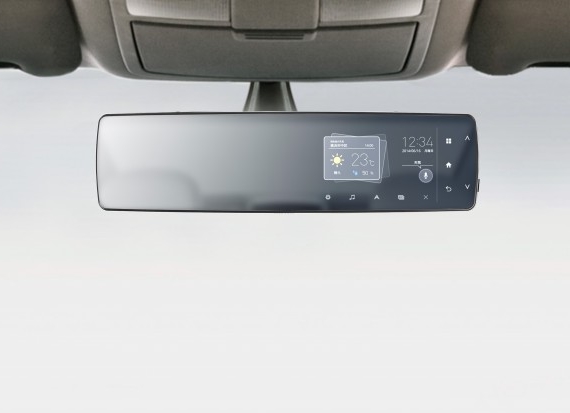 Today’s current connected car tech is pretty amazing, especially with Carplay and Android Auto on the way.  Which makes it heartbreaking when you have an older model that runs perfectly fine, but doesn’t have any of those modern bells and whistles.  If you’re in Japan, Pioneer might have you covered with their Rearview Mirror Telematics Unit, an aftermarket replacement that turns the rearview mirror into a connected display panel.

At first glance, it looks like any regular rearview mirror that you look at to check the cars behind you, but then get startled by the presence of a woman in the backseat.  You take your eyes off to check the road then look back up in the mirror and she’s gone.  Cue eerie music.

Unlike regular rearview mirrors, though, the Pioneer Rearview Mirror Telematics Unit can display information like a modern infotainment system, showing you real-time info like turn-by-turn navigation, traffic updates, and news on a 5-inch LCD integrated into its right side.  When not displaying information, the LCD looks like a part of the mirror, so you can use it to check whether all your nose hairs are properly trimmed during slow-going traffic.  Information can be accessed via voice commands (recommended) or touch controls on the LCD side of the mirror (probably a bad idea), so everything is self-contained without needing to pull out a smartphone like most everything else these days.  Other features include LTE connectivity, a wide-angle camera on the back of the mirror that serves as a drive recorder, and Safe Driving Support Service (which uses data from the camera to detect potential hazards and provide warnings).

The Pioneer Rearview Mirror Telematics Unit is slated to debut in Japan second quarter of 2015.