Robovie-PC Is A 15-Inch Robot With An Embedded PC 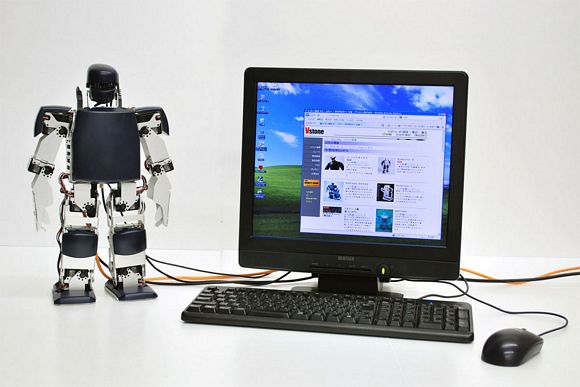 Why program a robot from a computer when you can put an entire PC on a robot?  That’s exactly what they did with the Robovie-PC, an articulated, awesome-looking robot with full-fledged netbook guts.

Created by Vstone and ATR, the humanoid machine merges features from the popular RoboCup Soccer robots (not the putting practice one) and the Robovie-X platform.  Even better, you can program it without using any external computer since it comes with one right on its trunk.  Just plug in a monitor to the VGA out connector and use it like any nettop you can grab at Best Buy. 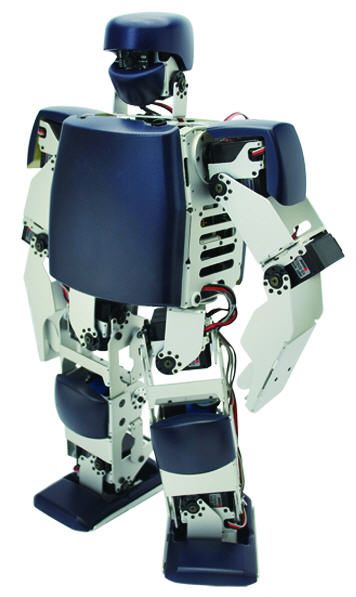 The robot itself measures 15 inches tall and weighs 4.8 lbs.  It comes pre-assembled, boasting 20 degrees of programmable freedom, with a gear interlock parallel link mechanism on the legs, a three-axis accelerometer, two-axis gyro sensors and plenty of articulated movements.  The exterior is padded with polyurethane foam to make sure none of the inside components are damaged when it trips or falls.

As for the embedded computer, it comes with a 1.6GHz Atom Z530 processor, a 1.3 megapixel camera, onboard storage (not specified), Wi-Fi connectivity and several USB ports.  Basically, you can have programs running rampant (it can run Windows and Linux) while the robot moves, transmitting camera images and various information over wireless to your heart’s content.  It’s freaking awesome.

Even if you’re not into programming robots, how could this not be the coolest choice of a nettop computer you can get?  Screw those little Acer and Asus boxes – it’s a functional PC in a moving robot! Of course, you’re largely paying for the robot here, so don’t expect sub-$400 pricing, as has been the norm with Atom-powered computers.  Splurging on the Robovie-PC will damage you way more than that, as it currently sells for 399,000 Yen (around $4,400).