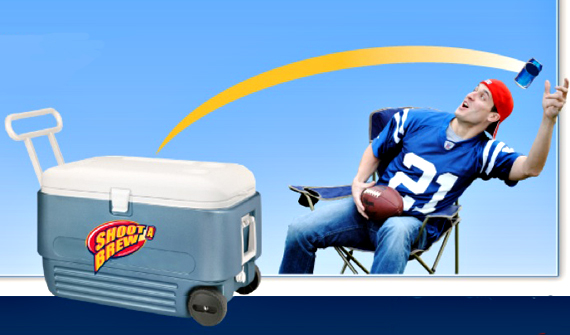 A cooler is very useful for keeping beer chilled during outdoor parties.  Know what can make it even more helpful, though?  If it lets you get a beer without having to walk over and scoop one.  That’s exactly what the Shoot A Brew Cooler does.

My longtime wish was for a robot cooler that you can ring on your cellphone and will automatically track you down using your phone’s GPS, rolling right next to you to let you grab a cold one.  That’s not what this new gadget does.  Instead, it hurls beer cans your way (like a tennis ball machine, except it  throws booze), which is even better, if only for the huge likelihood of accidents it creates.

The Shoot A Brew Cooler looks like a regular pull-along cooler at first glance.  With a handle and two wheels, you can easily straddle it along while searching for a good place to set the beer up.  It can fit up to 24 12-oz. cans at a time, with a designated compartment for dumping the ice.  But that’s not why it’s awesome.

Instead, the lazy drunk’s contraption integrates a cannon-like mechanism that hurls beer cans in the air, sending them eight feet away into your direction.  Able to reload in two seconds, you can literally make it rain beer cans, which is brilliant when you catch one with your hand and horrible when you end up catching it with your face.  A waterproof remote control is included, allowing you to “pull” the trigger, every time you need a fresh round (even while lounging in the pool).

Currently on pre-order for $295, I’m still not convinced that the can-firing Shoot A Brew Cooler really is a good idea.  We have to admit, though, it looks fun.  Check out the demo video below.