Play Me Some Of That Slow Music: The Snailele 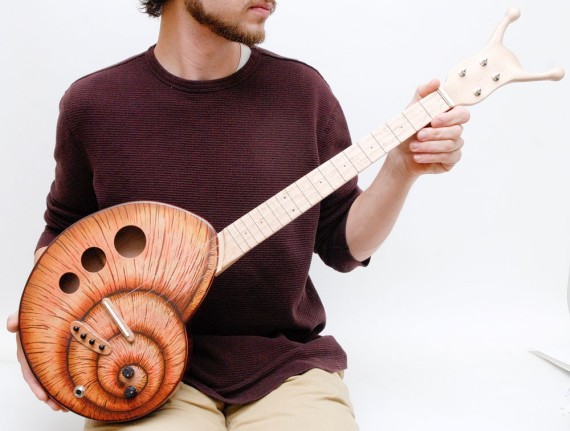 A ukulele isn’t exactly the musical instrument of choice for making audiences swoon.  The Snailele won’t either, but it sure as hell looks many times more fascinating than your regular stringed chordophone.

Created by Celentano Woodworks, the plucked lute was originally custom-built for Darby Wilcox of the musical duo, O Mello Cello Tree.  If you’re into the whole folk/acoustic/indie/mollusk thing, you’ve probably heard of them or seen them live.  We’re not sure about the choice to fashion the instrument into a mollusk, but if that floats your boat…hey…we’re all for it.

The Snailele is a baritone/tenor ukulele that can be played both as an acoustic four-stringer or plugged into an amp for some electric finger-picking.   Both the neck and the antennaed head are left bare, with the body hand-painted to resemble a snail’s shell.   Construction is made out of hard and soft maple, with a saddle pickup and a built-in preamp to go with tone and volume controls.

While I doubt most of you would want an instrument designed to look like a snail, you have to admit: the Snailele is pretty sweet.  If you like your shell-cased slugs and your ukulele, Celentano Woodworks can make you a custom one just like it, priced at $800.