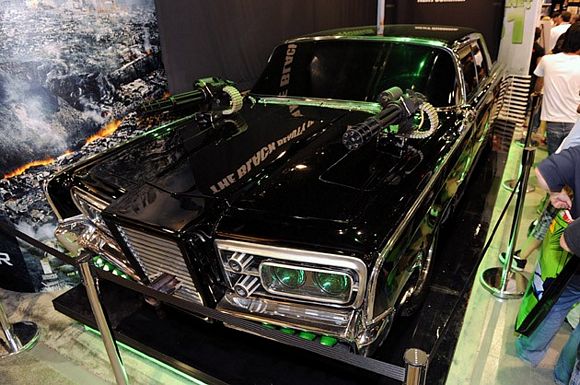 The on-again, off-again Green Hornet movie with Seth Rogen is apparently a lock once more. To go with the large screen reboot of the famed TV series will be a new edition of the Black Beauty, the masked hero’s signature ride, shown here from photos at last week’s Comic Con.

Staying faithful to the original Beauty, the silver screen version appears to be built off a similar Imperial Crown 4-door hardtop. The guys at Autoblog are guessing it’s the same 1966 version the TV car came from, though others are saying it’s a 1965 model.

Instead of “masking” up the vehicle with a new armor as its tuned-out predecessor, the new Black Beauty wears itself naked. Clad in a shiny black paint job with chrome accents, it actually ends up a tad more striking than the original’s now-seemingly conservative looks. 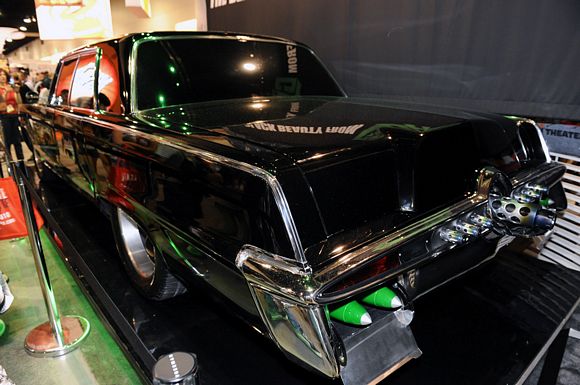 Of course, the ride is decked with green lighting panels and a generous heap of weapons for fighting the requisite supervillains. From what we can tell, it packs the trademark grille- and bumper-mounted weapons from the old Black Beauty, along with new hood-mounted gatling guns, missile launchers, smokescreen and bullet-proof sheet metal and glass. Hopefully, it’s as attuned to survival as this battle-ready Continental.

According to lead star Seth Rogen (I still can’t imagine the funnyman as the Hornet, I’m sorry), various tuning houses have been tapped to fashion designs for the new vehicle. In the end, he said that they settled on the current version because it looked like some regular guy “can actually build this car.” It does look pretty bad-ass, doesn’t it?