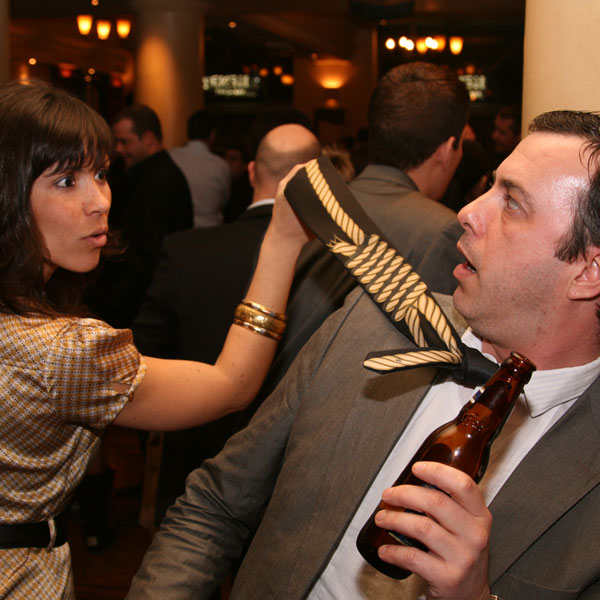 Neckties, being one of the few fashion accessories men regularly wear, do get a lot of attention in stores.  While normally donned in formal settings, it’s not uncommon to come across a funky necktie every now and then.  I’ve personally gotten gifts of neckties with cartoon characters, skulls and such.

Twisted Ties, though, takes the regular necktie and fashions it two ways – business out front and party in the back.  Each of the 100% polyester reversible neckties can be used both ways, with each side sporting its own patterns.

One side is always work-appropriate, either sporting plain colors or the usual stripes.  Turn them over, though, and you get some crazy designs, including a drooling tongue, a “PULL ME” instruction and a hanging rope, among others.  Since I haven’t seen one of these accessories in person, I’m not sure how well it actually wears.  Looking at the models donning the ties on the website, though, the interplay between the two designs look seamless, with no telling clues about what lies right on the other side.

It’s a pretty simple trick that could find a lot of use, especially if you like to hit the party scene right after toiling all day at work.   Each Twisted Tie costs around $22.