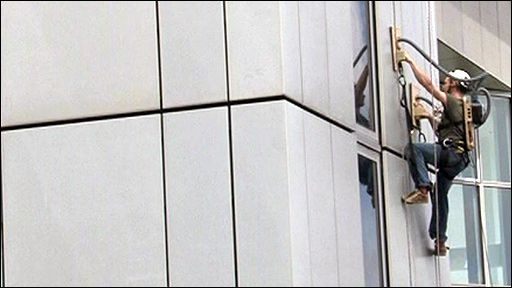 Ever wanted to crawl across building walls like Spiderman?  We’ve already seen guys do it in the past with sheer rock climbing prowess.  BBC TV presenter Jem Stansfield, however, pulled it off with a little of bit of home-brewed science.

Filming a stunt for the BBC One science program, Bang Goes The Theory, Stansfield outfitted himself with Vacuum Gloves, which stuck to the walls of the BBC White City building, en route to scaling the 120 foot structure.  It’s not as “amazing” as Spiderman’s superhero abilities, nor as impressive as those guys doing it with their bare hands, but the feat does make wall-climbing a realistic proposition for the rest of us.

According to Jem, the Vacuum Gloves were made out of regular household vacuum cleaners, a fact which will probably spur more than a handful of home-tinkerers trying to fashion one of their own.  How the hell he generated that much suction power out of it, though, is what I really want to know.  He wore a complete set of safety harness while making his way up the West London structure, but it sure didn’t look like it was really necessary, as the wall-clinging contraption capably performed its duties (unless, of course, the rope pulled most of his weight, which is possible).

The feat was recorded in the video below.  As you can see, things began to get a little hairy as he got near the top, though the whole thing is utterly fascinating.  Now, we sit and wait for more YouTube videos of home brewers trying to replicate the same cool effect – hopefully, in a hilarious manner.