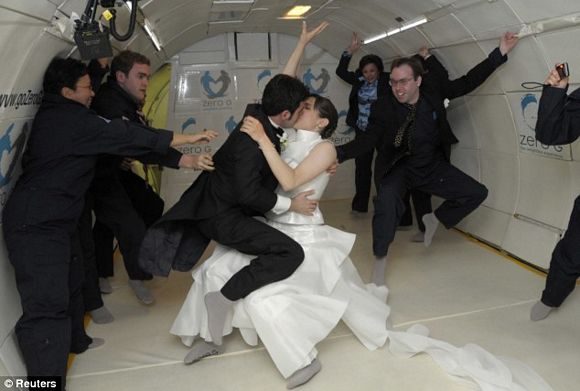 While we’re still waiting for the inaugural space wedding, here’s news to tide us over.  A New York couple just finished exchanging vows in zero gravity and are, officially, the first pair to do so.

Lovebirds Noah Fullmore and Erin Finnegan earned the honor after getting hitched inside a Zero Gravity Flight, which simulates the weightlessness experienced by astronauts in space without actually leaving the earth’s atmosphere.  The ceremony occurred inside a converted Boeing 727 jet, which achieves the zero-gravity effect every time it performs a dive up in the air.

According to the duo, they paid over £10,000 for the privilege, getting them 90 minutes of time aboard the aircraft after its take-off from the Kennedy Space Center in Florida.  This price includes a total of 16 steep plummets known as parabolic arcs, which create the weightlessness for passengers inside the cabin.

Both science fiction fans, the wedding rings they exchanged are similarly unconventional and contain precious metal fragments of a meteorite that crashed on earth 30,000 years ago (whether you want to believe that or not is another thing entirely, of course).  The bride also wore a special wedding dress, fitted with trousers, to keep her privates duly covered during the twists and turns.

This gives that feeling of floating in the air on your wedding day a whole new meaning, doesn’t it?