Amphicar: Still Alive After All These Years 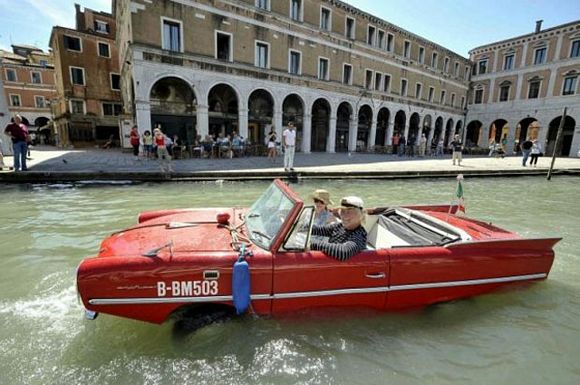 Did you even know they built cars that can travel on both land and water back in the 1960s?  I sure as hell didn’t.  Apparently, though, they did – 4,500 of them, in fact.  Called the Amphicar, an estimated 500 of them are purported to still be in functional existence.

With a production run that lasted from 1961 to 1967, the Amphicar is the only non-military amphibious vehicle to see any form of commercial manufacturing, with other efforts often leading to no more than 50 cars made.  As such, they’re among the rarest vehicles you can find today.

Sporting a rear-mounted Triumph Herald motor that produces 43 bhp, the Amphicar can manage over 70 mph on the road and up to 8 knots on water.  A versatile and functional ride that warps the term “all-terrain”, it’s supposed to run better than many 4×4’s in snow, aided by its 10 inches of ground clearance and narrow rear wheels.  They claim it is capable of some serious seafaring (though I wouldn’t bet my life on it), having had demonstrations taking it from Africa to Spain, San Diego to Catalina Island and England to France, respectively.

Want your own land-rolling, water-propelling, snow-thumping ride?  A number of restored machines are currently available from individual enthusiasts, many of them listed on the classifieds sections of both Amphicar-related sites below.  Prices for reconditioned rides vary from between $30,000 to $50,000.