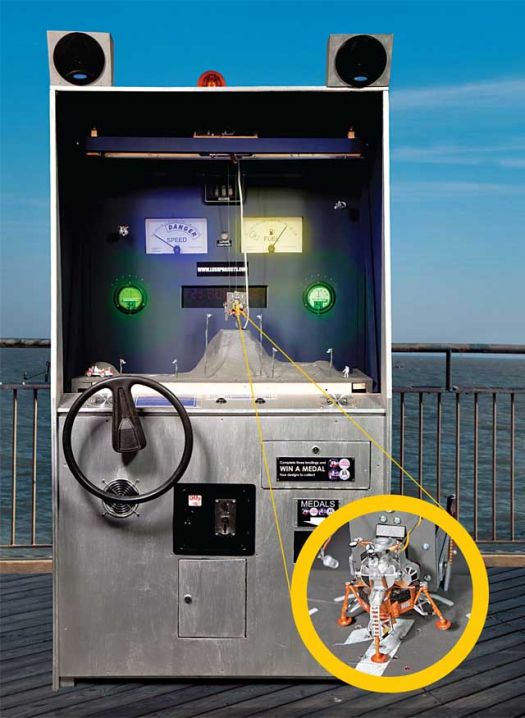 You’ve never really played Lunar Lander till you play it in analog.   And that’s what the Real-Life Lunar Lander Replica does, which brings the 1979 Atari classic into a physical box with real moving parts.

Created by British engineer Iain Sharp, the contraption was built to honor the 40th anniversary of man’s first landing at the moon.  Like the original game, the player must attempt to settle a lunar module on the moon’s surface, with success determined by both descent rate and its proximity to actual target spots. 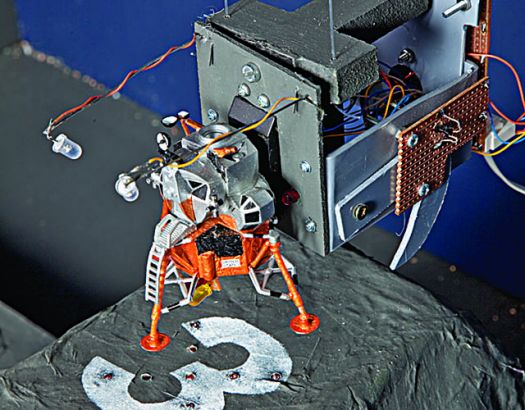 Sharp’s version uses a Lunar Lander model that hangs on a fishing line, flying over a landscape made from paper mache.  You use a wheel to steer the vehicle and a button to control thrust, inputs from which are processed by two decrepit $30 PCs.  The computers then send instructions to the motors (plucked out of inkjet printers) at a rate of 50 times per second.

A science fiction style voiceover gives you flight directives, while touch sensors on the ground measure how well you have managed to nail your target.  Mess up the landing and explosions will blare out of the rig’s audio speakers, along with a bevy of blinking red lights.  That’s right, you just wasted billions of dollars of taxpayer money on a bad landing!

The Real-Life Lunar Lander Replica only cost Sharp $800 to build.  It currently sits at the Southwold Pier in Suffolk, England, where it dispenses Apollo-themed pin-on buttons as prizes to players who manage to pull off three successful landings consecutively.