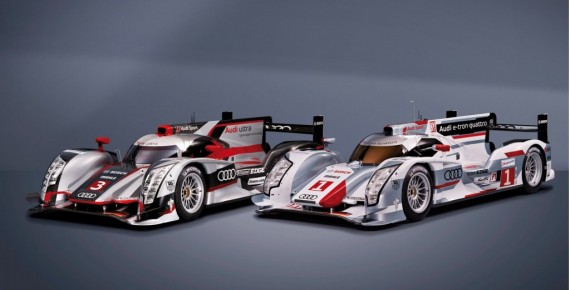 Whether the Audi R18 E-Tron Quattro performs well at the Le Mans 24 Hour in June, it’s bound to be a serious eye-catcher.  I mean, look at it.  Beyond the ornate looks, however, the vehicle should generate additional interest for being the first Le Mans prototype “to combine a highly-efficient TDI with a hybrid system.”

Most hybrids work by relying on a battery while running at low speeds, firing up the old combustion engine when it needs bigger power.  Audi’s endurance racer, however, sports a four-wheel drive system that runs the front axle using electric motors and the rear with a 510-horsepower V6 TDI engine. 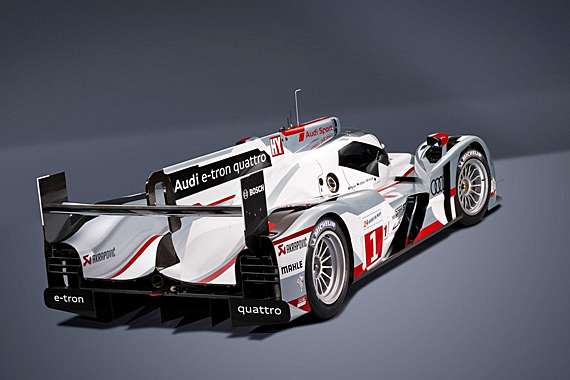 The Audi R18 E-Tron Quattro is built upon last year’s race-winning R18, which played an ideal host to the hybrid powertrain, thanks to its weight-optimized design.  The vehicle uses kinetic energy recovered during braking as additional electricity, which is stored in the flywheel accumulator before being tapped for retrieval when the car hits speeds above 120 kmh.  Since the hybrid drivetrain puts considerable heft on the vehicle, Audi designed a second prototype called the R18 Ultra, which compensates by using lightweight components like carbon fiber composite wherever it made sense.

Before hitting the ground at Le Mans, the Audi R18 E-Tron Quattro will debut this coming May 5th during the 6-hour race at Spa-Francorchamps in Belgium.