Cotton Candy Puts An Android Computer In A Dongle 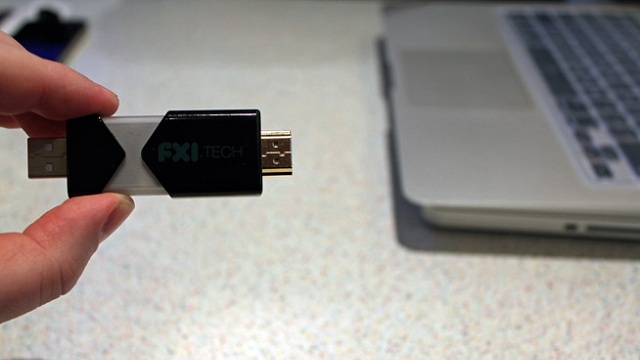 Putting storage, sensors and streaming systems on a thumb drive used to be impressive enough.  Not anymore.  Somebody just built the Cotton Candy, an entire functional computer inside a tiny USB stick.

Made by FXI Tech, that innocent-looking dongle hides a dual-core 1.2-GHz Samsung Exynos ARM CPU inside its shell, along with a copy of Android OS ready to run at your bidding.  Plug it into your PC and it will run a virtualized window of the mobile OS on your desktop, treating the computer as a dumb terminal.  Of course, that brings us to the crappiness of Android on a mouse-and-keyboard environment, but we won’t let that spoil the triumphant geekiness of this thing.

Aside from the Cortex A9-based CPU, Cotton Candy crams in ARM’s quad-core Mali GPU and 1GB of RAM, so all processing is done right on the stick.  It’s got its own WiFi, Bluetooth, microSD card slot and HDMI, too, making for a real all-in-one system that you can plug in when you feel like punishing yourself by using Android even when there’s a PC at hand.

The HDMI plug, by the way, is strictly for connecting it to an HDTV for display — you’ll need the USB sticking somewhere else for all the magic to happen.  For now, the virtualization software embedded into the dongle sounds like it’s strictly for computers, although they’re looking to roll it out for use by other devices with a screen and a USB port, as well (such as TVs and smartphones).