Fiat 500 Barbie No Longer A Concept 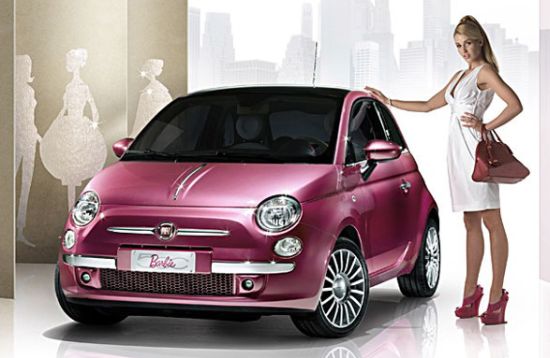 At least a dozen or so real-life Barbie doll cars that have rolled out over the years, including custom one-offs to limited runs like the numerous editions of Ferrari Barbie.  The latest doll-inspired automobile came to us two months ago with the Barbie edition Fiat 500, a set of wheels designed to commemorate the storied brand’s 50th year anniversary.

Decked in a cant-miss shade of pink, the Fiat Barbie sports tasteful details, pointing towards a vehicle that a real Barbie would drive around town instead of a toy-looking creation.  Made in collaboration with Mattel, it sports 60s-style aesthetics and appears in photos, in fact, with a live-model Barbie who is unmistakably from that era.

While it was previously shown off during the March 2009 anniversary celebrations for the iconic doll, the car continued to evolve, with Fiat adding poignant touches before rolling out the market versions.  New images have been released showing off the updated vehicle, which now sports luxurious detailing likely to make it an even more attractive collector’s item.

The Fiat Barbie still shows the same tempered realism as when it first came out, with a deeper lacquer finish that adds just a tinge of hardness to its glossy pink body.  More luxurious than ever, the interior bezel, hubcaps, antenna and window moldings now come lined with Swarovski crystals. A crystal-encrusted Barbie silhouette prominently sits on the windows on both the right and left sides.  Other updates include silver-laminated Alcantara fabric seats, a light up Vanity mirror and a number of silhouette details in the cabin to make sure the Barbie theme is reinforced for whoever’s behind the wheel.

Basically, the car has been tuned up to be more “girly”, a wise decision considering the real audience for the ride is likely to be the same girls who collected Barbie dolls in their youth.  The original intent, however, was for the vehicle to be Ken’s car, which means it’s about as manly as a Ken ride could ever be – yep.

If you missed out on previous editions of Barbie automobiles, including the pink Corvette and various iterations of the Ferrari Barbie, this may be your chance to have an official Mattel-approved custom on your Malibu garage.  Only five of the limited run vehicle will be made with each one costing 100,000 Euros.  If you can’t afford that, you can akways trek down to the toy shop and just get a toy instead – close your eyes and it might even feel like the real thing.