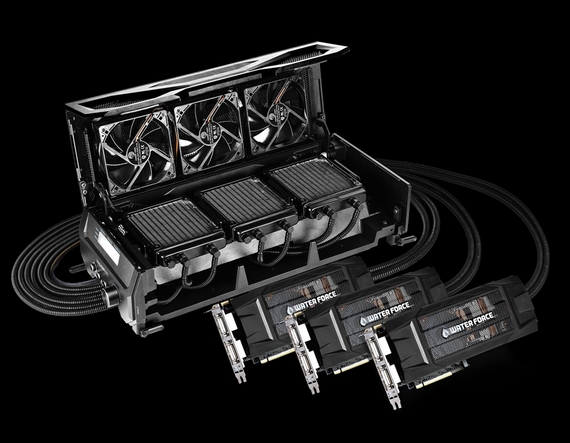 With the PS4 and Xbox One both embracing an x86 architecture, we’re likely going to see a lot more cross-platform games that push PC graphics performance to insane levels.  And when you’re going to deal with that level of crazy, you’ll need an equally crazy graphics card to handle it.  Well, this Gigabyte GV-N980X3WA-4GD looks about as insane as graphics hardware can get.

Rather than a single card, this rig actually consists of three SLI graphics cards, all of which are hooked up to a dedicated radiator to handle cooling duties.  This radiator, by the way, is so big, it ships in its own case.  And, no, it’s not a small case, with dimensions big enough to cover the entire top of a standard gaming tower (it should house a mini-ITX PC easily, with room to spare). 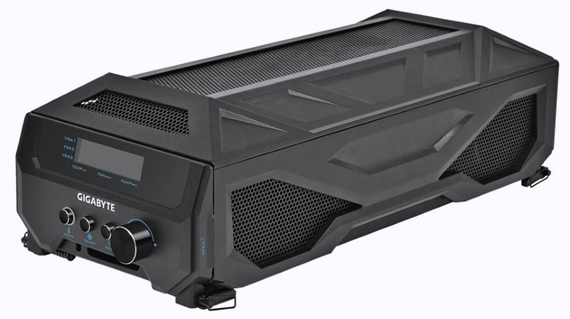 The Gigabyte GV-N980X3WA-4GD uses three NVIDIA GeForce GTX 980 GPUs, each with 4GB of DDR5 memory and a full set of connectors (DVI-I, DVI-D, HDMI, DisplayPort 3).  The big feature, of course, is the cooling solution called Waterforce, a water-cooling system that employs a three-way SLI closed loop to dissipate heat from each of the graphics cards.  It comes with its own control panel right on the case, allowing users to check the performance of each card, then individually adjust the fan and pump speeds to ensure proper cooling.  Also on tap is Gigabyte’s Flex display technology, which gives the system the ability to automatically detect any connected monitors, enabling setup-free multi-display gaming for up to four screens at a time. 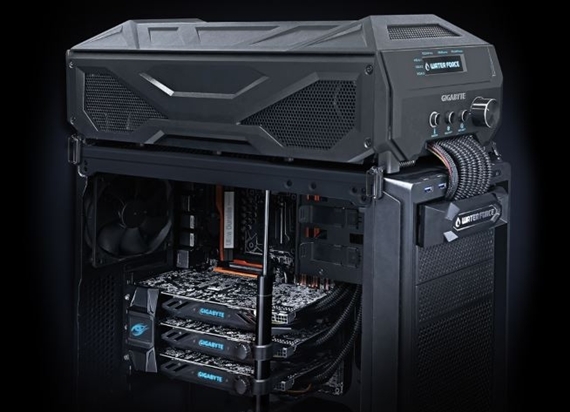 Sure, the Gigabyte GV-N980X3WA-4GD sounds overkill, but if you want to play at max settings with any new PC game that comes out for the next five years (heck, maybe even longer), this thing should the trick.  No pricing has been listed, but we imagine this going for a over two grand, easy (most likely, way higher).