Hoverbike Is A Motorcycle Hovercraft 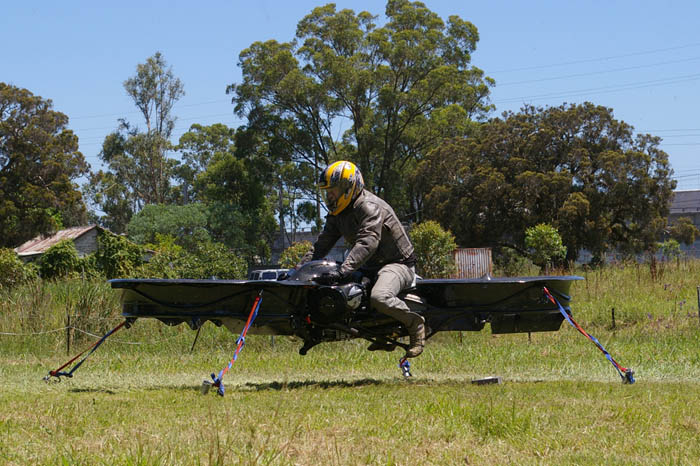 Science fiction promised us many things by 2011 that haven’t really materialized yet, like mass-market jetpacks and robot servants at your beck and call.  Hopefully, we’ll have better luck waiting on this Hoverbike to hit mass production.

Created by Chris Malloy, the vehicle is, basically, an airborne motorbike.  You ride it like a motorcycle, hugging metal between your legs, all while you’re floating on air.  It features motorcycle-style handlebars for driving (you, literally, turn the same way as a bike) and twist grips for controlling both thrust and reverse. 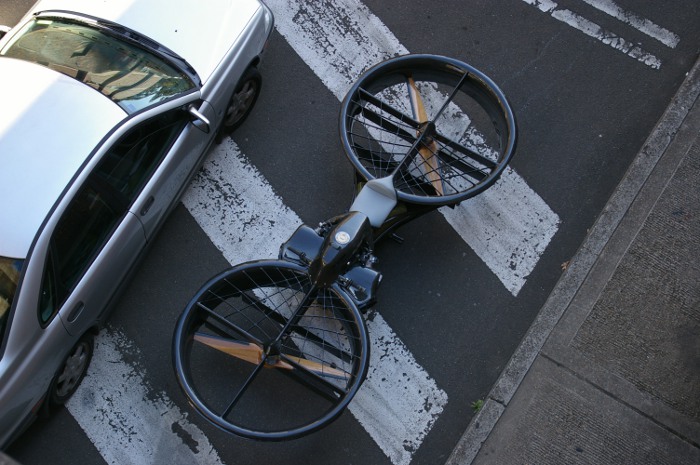 Currently in the development stages, the latest version of the Hoverbike uses a 1170cc 4-stroke engine to deliver 80 kW to the two ducted propellers on the front and rear.  Constructed out of carbon fiber, it weighs a manageable 231 pounds with a maximum takeoff weight of 595 pounds.

So far, all testing done have had the vehicle tethered to the ground (because, you know, a flying motorcycle can actually leave you dead).  According to his current calculations, though, the vehicle’s high thrust to weight ratio should help it reach an indicated airspeed of 150 knots (173 mph), all while soaring at up to 10,000 feet. Expected range on the primary fuel tank is 92 miles, assuming you’re riding at a constant speed of 80 knots (92 mph).

It will likely be a few months before the Hovercraft undergoes untethered testing, likely after it gets fitted with gyros (for extra stability) and a parachute (for landing safely, in case of engine failure).  One thing’s for sure: if this thing works, I’m buying ten of it (unless it costs $1 billion per unit, of course, at which point, I’ll only buy two).