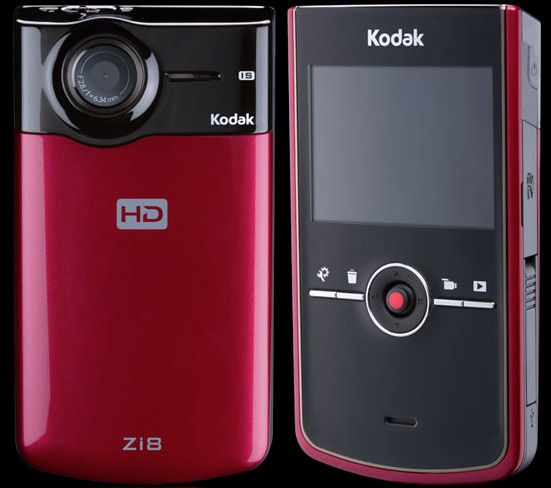 Pocket camcorders are about to get a whole lot better.  Kodak just announced the new Zi8, a small, compact motion capture device, that can manage 1080p video recordings, along with a host of other shooting talents.

Sporting the same pint-sized form factor popularized by the Flip Video, the new device should easily slip into any pocket, all while bringing a host of camcorder features previously unavailable in similar gadgets.   The Kodak Zi8 is the first mini-camcorder to offer full HD video recording, a considerable step-up from the 720p quality that current high-end devices in the market offer.

Not content with the 1080p video, it also adds in digital image stabilization and face tracking to the mix.  In a nutshell, it should allow for extremely improved video captures, without sacrificing any of the conveniences that pocket camcorders are known for.  Like previous releases in Kodak’s line, the Zi8 offers one-click uploads to YouTube and Facebook,  a swing-out USB arm and a microSDHC slot.  Other details include a 2.5-inch LCD,  bundled HDMI cable for direct viewing on HDTVs, remote control, an external mic slot and 5MP stills.

I’ve been a holdout on pocket camcorders, largely because of the lack of image stabilization and poor audio quality.  The Kodak Zi8 is probably the first to offer a solution for both of these issues, boasting software-based correction and a slot for an external mic.

That’s not even the best part.  While industry-leader Flip is selling their 720p pocket shooters for over $200 apiece, Kodak is pricing the Zi8 at a mere $180.  Slated to hit the market in September, it might be a good time to predict pocket camcorder prices going down severely, right before Christmas.