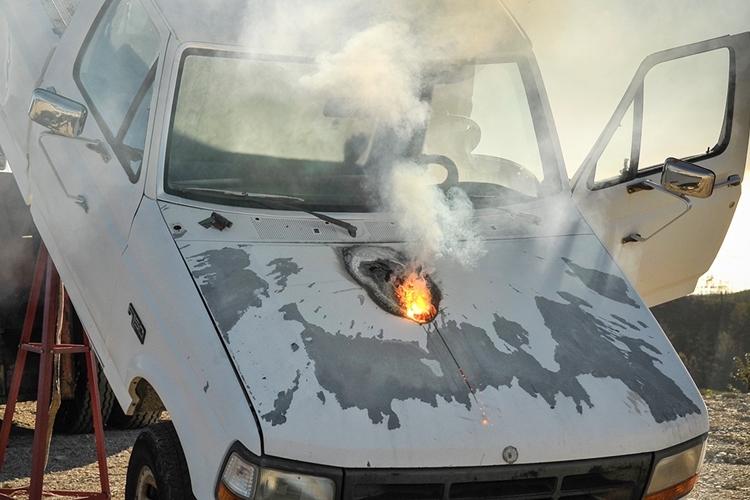 Weaponized lasers are slowly becoming real. A while back, we saw the US Navy’s 30kW laser destroying boats and drones from a short distance. This time around, Lockheed Martin did a field test of their fiber-optic laser, ATHENA, boring a hole through the engine manifold of a stationary truck that was positioned over a mile away.

Short for Advanced Test High Energy Asset, the ground-based prototype managed to burn through the engine in a matter of seconds, demonstrating its potent ability to render oncoming vehicles (or giant attack robots) dead in their tracks. Yes, the truck had its engine running during the test (although it wasn’t being driven), showing off the weapon’s potential for stopping vehicles without causing an explosion.

ATHENA uses a 30-kilowatt, single-mode fiber laser weapon system prototype also developed by Lockheed Martin, which uses a technique called spectral beam combining. Under this technique, the weapon combines multiple fiber laser modules into a single, powerful, high-quality beam, a design that the group undertook in order to remove some of the inefficiencies encountered in previous weaponized laser systems (e.g. large size, high power requirement, and long cooling time). With spectral beam combining, they were able to create a prototype that uses 50 percent less power than equivalent solid-state lasers, cools considerably faster due to a large surface-to-volume ratio, and makes better use of space because it employs optical fibers that can be coiled like a rope.

According to Lockheed Martin, ATHENA’s test represents the next step in developing suitable “laser weapon systems for military aircraft, helicopters, ships, and trucks.”