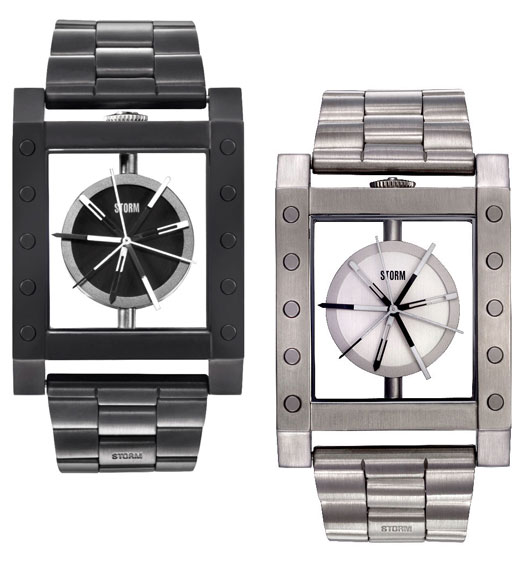 When I was little, it took me a long while to figure out how to read watches with hands.  We always used digital watches, even at home, so I never got used to two-handed clocks until I started school.  If they made me learn how to read analog watches with nine hands, like the Storm Synth, I would have given up on the spot.

The limited edition timepiece unabashedly follows the lead of watch faces that make reading time difficult.  Instead of sporting funky systems or limb-twisting dials, the Storm Synth makes you squint your eyes in order to make out the hours clearly.

Camouflaging the time, the Synth multiplies the usual dial’s hands (hour, minute, second) by three.  Three of them correspond to the actual time, while the others are just intended to confound you.  To make time-telling a little easier, the actual watch hands sport barely noticeable pointed tips – hopefully, you can get used to it before you smash the watch to the ground in frustration.

Sporting very stylish looks, it comes housed in a 51mm long stainless steel body, with the actual watch mechanism suspended in the middle of the frame.  The case is clad in a cage-style design and is open on four sides, with the crown sitting at the top of the body.

The nine-handed Storm Synth watches are very reasonably priced at $170 for the steel model and $199 for the slate.

Also check out these deals available on Storm of London watches.