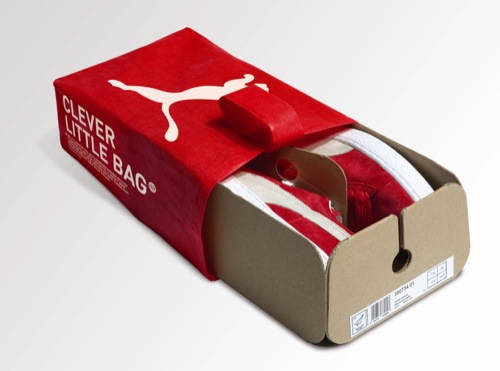 Calling your own product “clever” is smarmy. I won’t take that against Puma’s new shoe box called Clever Little Bag, though, because it really is more ingenious than the traditional packaging you can buy shoes in.

Released as part of the “puma.safe” program, which looks to establish improved social and environmental standards for the company, the new packaging will allow them to reduce paper consumption by 65 percent every year, compared to the current system of using shoe boxes and apparel polyethylene bags. In case you’re wondering, that translates to 8,500 tons of paper, 275 tons of plastic, 20 million megajoules of electricity, one million liters of fuel and one million liters of water saved on annual basis.

The Clever Little Bag is basically a pouch with a carton frame integrated inside the container area. With its thrifty use of resources, cagey functionality and stylish looks, it ably bridges the gap between sustainability and design. Not only will the design keep away damage from the moment it leaves the factory, it makes taking the shoes home comfortable too. It completely eliminates the use of apparel bags, as well, since it’s already a reusable shoe bag all on its own.

Fashioned by renowned industrial designer Yves Béhar, it comes as part of the next phase of Puma’s sustainability initiatives, which seeks to adopt new policies across different levels of the company’s operations by 2015. According to the company, they looked at over 20,000 ideas and developed 40 prototypes before deciding on the final design.

Check out Puma’s presentation video for the Clever Little Bag below.