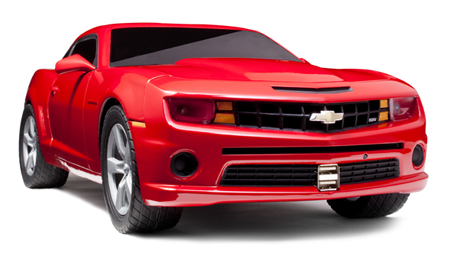 More and more computers have been finding their way inside cars these days.  The Camaro Personal Computer, though, takes that convergence a little too literally, cramming a desktop PC’s guts inside a striking Chevy Camaro case.

A desktop-sized replica of the 2010 Camaro, the case’s body is fully dolled-up to mimic the real automobile, all while integrating the PC’s ports and buttons into the design.   The hood ornament, for instance, actually acts as the machine’s power button, with the front bumper holding a slot-loading optical disc drive and two USB ports right under it.  A slew of other ports (VGA, ethernet, audio I/O, dual USB and HDMI) sit in the rear bumper, right below the trunk.  The headlights act as LED indicators – one for power and the other for HDD activity. 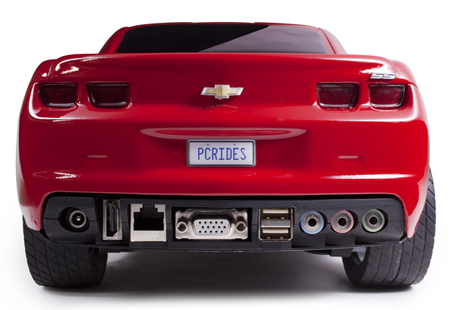 They claim it can do full 1080p video with true-fidelity 6.1 audio capably, so this could prove a stylish media PC for the living room if you need one.  It comes with Windows Home 7 Premium and is officially licensed from General Motors.

Aside from the “victory red” finish in the photos, the Camaro Personal Computer is also available in black and silver ice metallic.   Price starts at $1,240.