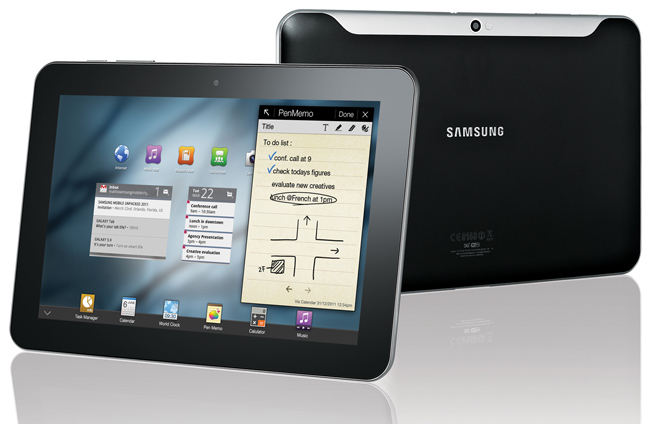 Samsung just announced two new entrants into the tablet space.  Redesigned and reworked to better compete with Apple’s iPad, the new Samsung Galaxy Tabs both show off thinner frames than the original 10-incher the company brought out just a short while ago.

The new Galaxy Tabs will come in 10.1- and 8.9-inch screen sizes, with bodies measuring a slim 8.6mm (weights are  595g and 470g, respectively).  The pair will have Android 3.0 Honeycomb at the helm, with the customized TouchWiz UX running on top of it.

Both the Samsung Galaxy Tab 10.1 and the Samsung Galaxy Tab 8.9 feature a 1280 x 800 resolution capacitive touchscreen, a 1GHz dual core processor, stereo speakers and dual cameras (3.0 megapixel in the rear, 2.0 megapixels in front).  Taking a cue from the iPad 2, they will be available in both WiFi-only and 3G versions.  Preloaded software include the company’s own content centers, Readers Hub and Music Hub, as well as its messaging, calendar and social feeds aggregator, Social Hub.

While Samsung is pimping the fact that it’s the thinnest tablet available today, they still have an uphill battle ahead.  We doubt that the 0.2mm edge over the iPad is really enough to compel most users to an erstwhile untested device, although Flash support on such a big screen sure sounds like an attractive proposition (hello, streaming pirated movies while in the toilet — tee-hee).