If you get giddy firing up one of Wicked Laser’s handheld laser beams, then we have a feeling you’ll be ecstatic with joy playing with YouTube mad scientist Drake Anthony’s latest creation: a 200-Watt Laser Bazooka, cobbled together using second-hand parts. No, not parts from a military laser weapon that’s been junked, but a handful of old DLP projectors he picked up on eBay. 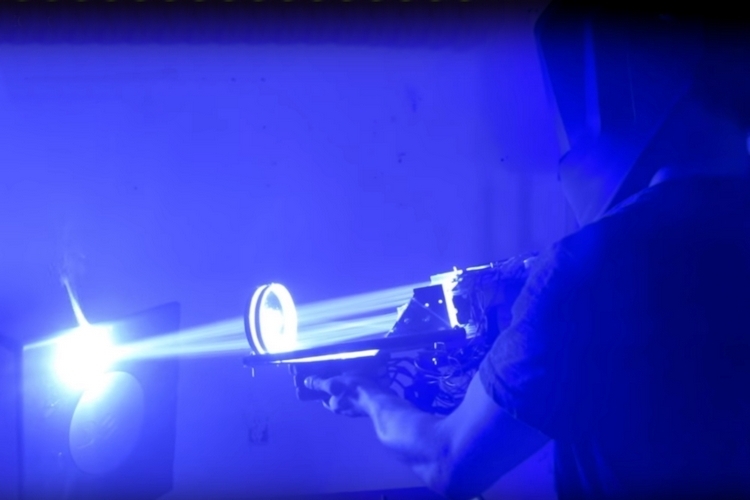 That’s right, someone turned erstwhile useless laser modules from old projectors into an insane weaponized laser that can pop balloons in a split second, cut through PC metal housings in seconds, and render anyone who looks at its beam completely blind. Yes, it’s that nasty. As such, Anthony had to wear special headgear to cover his eyes whenever he used the darn thing, essentially requiring you to turn into a costumed supervillain (come on, superheroes won’t carry laser weapons) every time you operate it.

The 200-Watt Laser Bazooka uses four DLP laser modules, which shoots their light through a massive lens to generate the resulting 200-watt beam. While that’s considerably less-powerful than military-grade laser weapons (like the US Navy’s 30kW laser cannon), it’s absolutely insane for a homemade rig, especially when you factor in the fact that the FDA limits consumer-grade lasers to 0.5-watts. Those laser pointers you use for presentations, by comparison, are rated at a mere 0.005 watts. It powers using a stack of lithium polymer batteries and consumes nearly a kilowatt of power – similar to the amount of power required by a microwave oven.

Check out Anthony’s YouTube channel, Styro Pyro, to see more of his projects.