Sustainable Formula 3 Car Made Of Vegetables 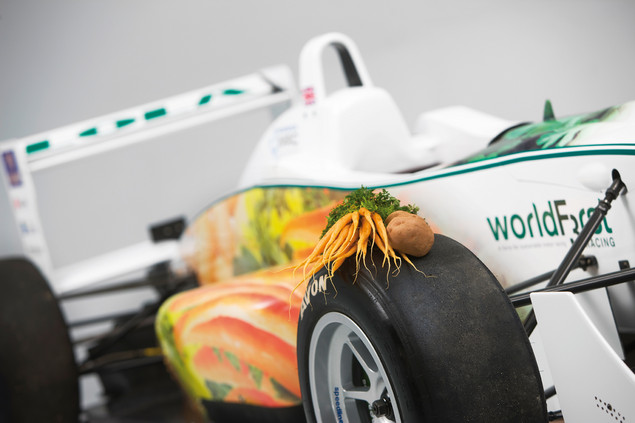 A car made from vegetables? Sounds like the kind of project The Wiggles might make in their make believe world but it is actually now a reality thanks to a group of race mad British scientists.
The international Formula racing car season has begun amid tons of controversy again this year.  Apart from the actions of a few drivers making false statements, the major bone of contention has been the cost involved in keeping a racing team competitive. Some of the smaller teams protest that they just cannot keep up with the expense of adding the gas guzzling engine boosters and gadgets that larger concerns are adding to their already “super” cars.

The WorldFirst Formula 3 car just may make such concerns a thing of the past in the near future. This car is the first ever to be entirely constructed from renewable, sustainable resources. Much of the car is constructed with a special polymer that is created from carrot fibers and those from other root vegetables. Potato starch core and flax fibers were used in the making of the wing mirrors, while the seats are crafted from a combination of soybean oil foam and recycled polyester. The car itself runs on plant oil based fuel, even though it does have a race caliber engine. 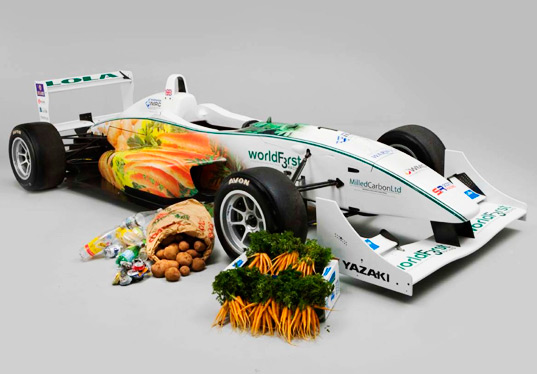 The “green” racer was the brainchild of a team of scientists at Britain’s University of Warwick. Its purpose is really twofold – produce a greener, environmentally friendly car and possibly save the sport of Formula car racing altogether. Many sponsors have pulled out of the sport altogether, and others, such as Virgin founder and billionaire daredevil Richard Branson have expressed an interest in sponsoring a team. But all express concerns about the eco-impact of the big gas guzzling cars racing around the track.
By creating the WorldFirst, project manager James Meredith believes he and his colleagues have successfully expounded the myth that so called green cars will never possess the power to be competitive racing machines. The prototype has been run in several Formula 3 trials and performed very well. Eventually the makers hope to make it worthy of the Formula 1 arena. I’d just watch out for hungry bunnies at the side of the track if I were them.