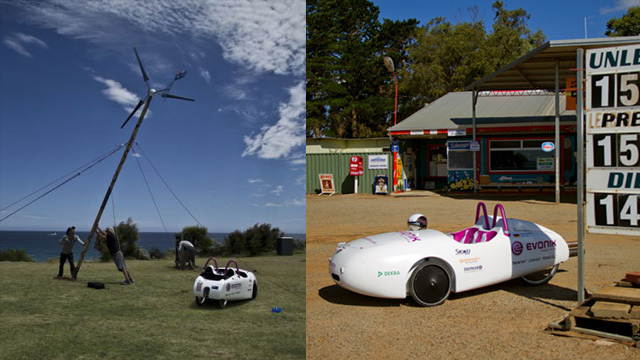 How’d you like to clock 3,107 miles on your electric car while spending just $13 on electricity bills?  That’s exactly what the Wind Explorer, a wind-powered electric automobile, did during an 18-day run across the Australian continent.

Built by a German team led by Dirk Gion and Stefan Simmerer, the two-seater car set three world records for wind-powered cars during its unprecedented trip from Albany to Sydney.  Throughout the course of those 18 days, the wind-powered automobile became the first vehicle of its kind to cross an entire continent, apart from covering the most distance on land and traveling the farthest during a 36-hour window. 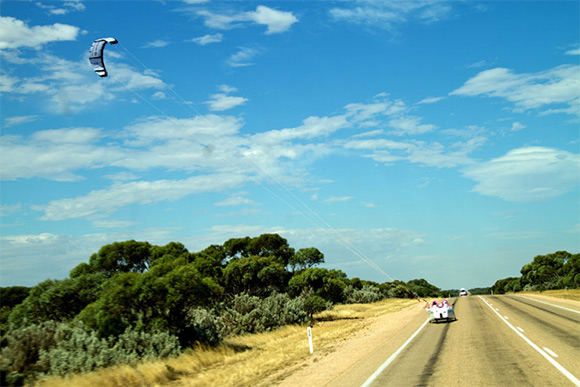 The Wind Explorer runs using two mechanisms: a battery-powered motor and a giant kite that literally propels it forward.  Charging the battery can be accomplished either by plugging to the mains or through a portable wind turbine (if you can call a 20-foot telescopic bamboo mast “portable”) that the vehicle travels with.  Do note that a separate vehicle carried the wind turbine during the run, which they needed to set up (30 minutes, according to the website) every time a recharge was in order.

Granted, this isn’t the kind of vehicle that proves a wind-powered car is a viable transport solution for the future.  Unless you’ll pass by many wind turbines that you can plug into, which isn’t all that likely.  Still, it’s a nice exercise in showing what’s possible for automobiles of the future.  Plus, a car pulled along by a giant kite sounds nothing but awesome.