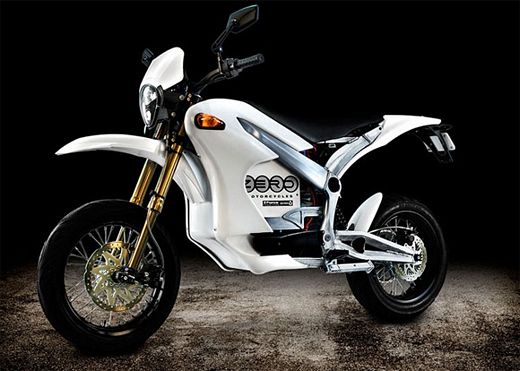 If the Segway P.U.M.A. from yesterday is a tad too dorky for your tastes, here’s an electric two-wheeler that may be more to your liking.  Clad in a sexy white body and street-legal specs, the 2009 Zero S Electric Supermoto lets you enjoy the same gas-free motoring, with none of the likely ridicule.  In fact, you might end up inviting exclaims of admiration instead.  Oooooh!

Sharing much of the same aggressive design cues as the off-road Zero X, it features an aircraft-grade aluminum frame, custom-injected molded styling and a low center of gravity.  With 62.5 lb/ft of torque and 31bhp instantly available, the one-speed Zero S can race to 60 mph in rapid time.   A four-hour full charge of the 4 kWh battery nets you up to 60 miles, though you’ll likely be getting less since this thing looks built to be pushed.

As with all electric rides, the new Zero street motorcycle produces no carbon emissions and should contain 100% recyclable components, same as its X model sibling.  It weighs 225 lbs, with the 80 lb power pack on board, and costs an estimated $.01 per mile to ride.

Orders are now being accepted for the 2009 Zero S Electric Supermoto with deliveries scheduled to begin in May.  Price is $9,950, with a $500 door-to-door delivery charge for anywhere in the continental US.

Zero Motorcycles via Hell For Leather