They Just Made Robots That Can Adapt To Injuries 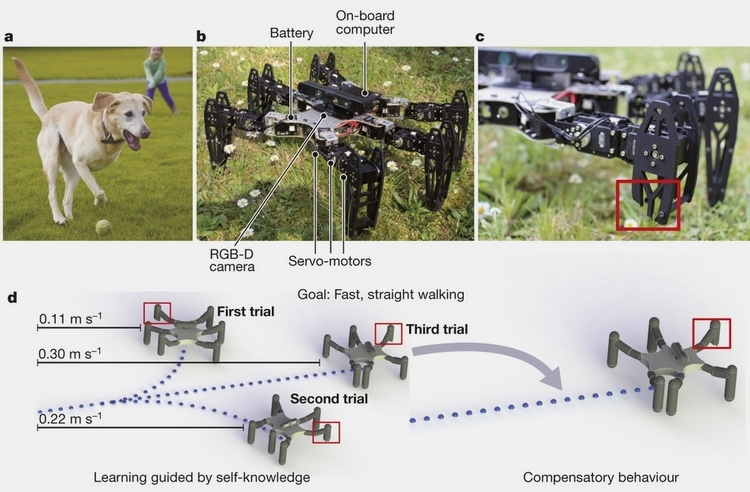 When the robot apocalypse goes down and tireless automatons are hunting down humans like deer in the woods, damaging their mobility will give you the best chance to run away to safety. Like, destroy a wheel or take out a leg joint to render them unable to keep up. Problem is, future robots may not be slowed down by such tactics anymore, since a new Intelligent Trial and Error algorithm claims to give droids the ability to recognize damage and adapt new ways to enable movement on the fly.

Developed by a team from the Université Pierre et Marie Curie (UPMC) led by Jean Baptiste Mouret, it’s a trial-and-error algorithm that enables robots to test out different possible new movements, then pick the best one. Everything happens in under two minutes, too, so you’ll barely get a lead before they’re back up and running.

Based on the behavior of animals, the Intelligent Trial and Error algorithm allows the robots to conduct micro-experiments to discover effective compensatory behaviors that will allow them to move. These behaviors are pre-programmed into their knowledge base, similar to animal intuitions, allowing them to access the movements instantaneously. Once it’s able to work through several of these experiments, it proceeds to choose the movement that works best, in spite of the impairment. They’ve tested the algorithm on several robots, including a six-legged crab-like automaton that adapted to losing two of its legs and a robotic arm that learned how to correctly place objects even after losing several of its motors.

Check out the full study from the link below.