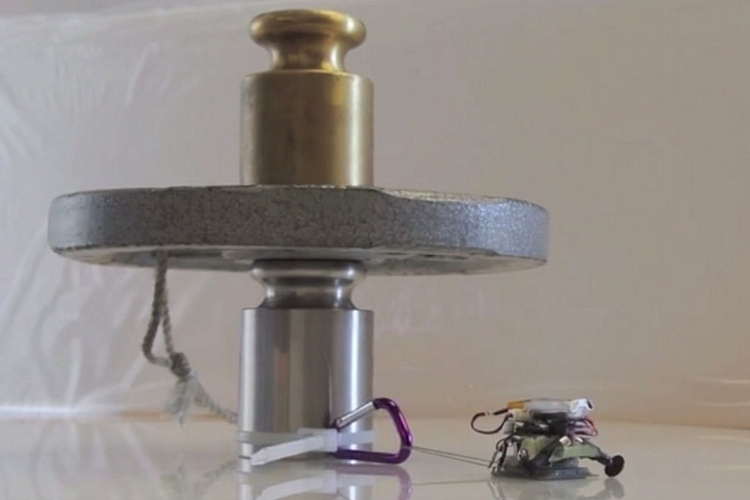 Slowly but surely, we’re starting to see the kind of robots sci-fi always promised we’d eventually have. Giant robots that juggle cars for our entertainment? Yes, please. Robot butlers that can operate your home appliances all on their own? Okay. How about robots armed with Hulk levels of strength? Apparently, that’s also on the table with this series of Super-Strong Robots built by mechanical engineers from California’s Stanford University.

While small in stature, each of the robots come with ridiculous amounts of strength, allowing them to haul objects many times their bodyweight. One of them, for instance, weighs just 9 grams, while being able to pull objects that exceed a full kilogram. An even smaller 20 milligram robot, which they assembled under a microscope, can haul up to 500 milligrams.   Most impressive, though, is a bot they call μTug, which weighs just 12 grams while dragging loads up to 24 kilos. It’s nuts.

Each of the robots come with two design elements that facilitate their unique abilities: gecko-like feet that grip firmly onto surfaces and movements that mimic that of an inchworm. The robot plants its gecko-like rear feet on the flat surface, then pushes its body in front similar to an inchworm’s forward motion, taking the load along with it. How about the super strength? That comes courtesy of those feet, which uses tiny spikes that can attach firmly onto both floors and walls, using it as leverage to move the much-heavier load.

According to the team, they’re hoping to scale the tiny robots (not easy, since they’ll also need to build bigger and more powerful foot spikes), which can be used to haul heavy loads around warehouses and building sites, as well as bring supplies to individuals trapped in high-rises during emergency situations (e.g. a rope ladder during a fire).  Check out the link below to learn more.