Subtle Butt Lets You Pass Gas Without Stinking Up The Joint 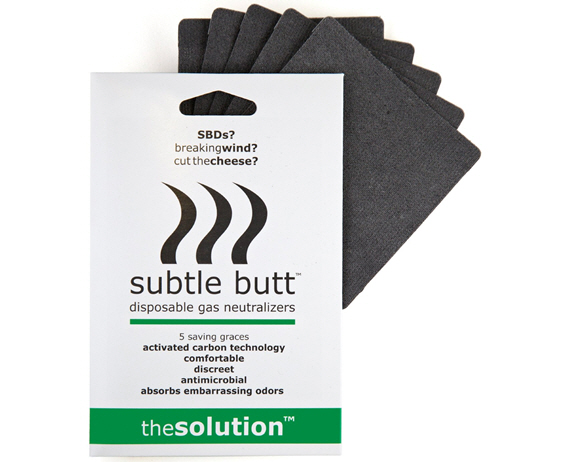 Occasionally, you’ll be lucky enough to let one loose that won’t stench up a room, but most of the time, your gas will stink.  It doesn’t matter whether you’re handsome like Ryan Gosling, pretty like Mila Kunis, or famous like every celebrity in the known universe.  Chances are, your farts stink just as bad.  The Subtle Butt claims it can do something about that.

An adhesive insert that attaches to your underwear (right on the area where the gas will pass), it will filter any wind you let loose, stripping it of unwanted olfactory sensations right before it goes out to the world at large.  Whether you’re in an elevator full of passengers, a presentation in front of a roomful of people, or a restaurant booth meeting your boyfriend’s parents for the first time, you’ll be able to break wind without causing an embarrassing scene.  Assuming, of course, it isn’t accompanied by a loud sound, in which case, you’re on your own.

Billed as a “gas neutralizer,” the Subtle Butt is a disposable pad made from activated carbon that’s covered by a soft fabric, which serves as an odor filter to take the stink out of any passing air that blows through it.  Two adhesive strips are placed on one side of the pad, allowing you to simply slap it onto your Instant Underpants to quickly give it a much-needed stench-destroying reinforcement.  It measures 3.25 inches on all sides and is only a sixteenth of an inch thick, so it can cover up the entire area adequately without creating any discomfort (they claim, you’ll probably even forget you’re wearing it).